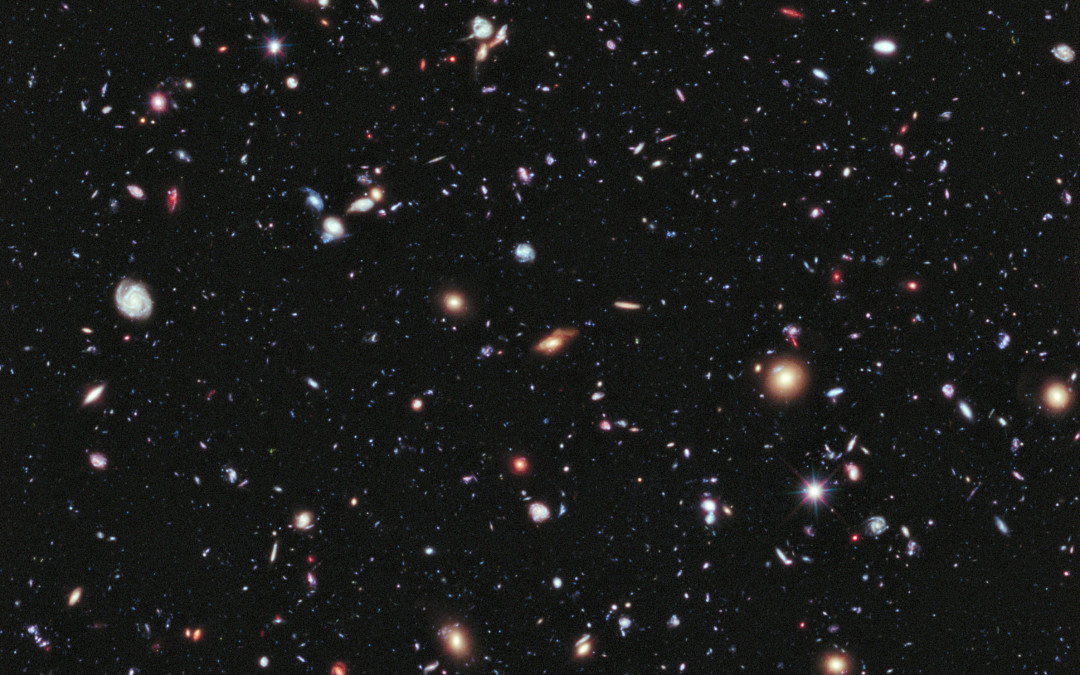 In the beginning God created the heavens and the earth.  ~ Genesis 1:1

Scientific evidence in the last century indicates that the cosmos, everything that is, started from a single point. As it turns out, atoms, the stuff everything is made of, are 99% empty space. If you were able to take that space out of all the atoms in the universe, what would be left would fit in a thimble. This theory goes on to posit that this single point when the entire cosmos was compacted in possibility, just waiting to become, to be… was 13.8 billion years ago. Then, a flash of light, an explosion happened. A sound was uttered and all of that potentiality was ushered into motion.

That is amazing enough, but the most amazing part is what happened after that. Things started getting more complicated, literally. Conditions were such that subatomic particles appeared, then simple atoms, then cells, then life! And guess what? The crowning jewel of creation, the most complex combination of particles, atoms, cells, neurons, flesh and blood came on the last day, the last minute actually.

As technology has progressed scientists have been able to see more and more. They are even reporting being able to see down to the particle level. You won’t believe this, but these particles don’t behave well. Some of them disappear and reappear in another place, not having traveled the distance between the two points. Kinda freaky huh? It’s like whoever is behind all this amazing, imaginative creativity could make a human body made of particles, atoms, cells and tissue – appear and disappear, walk through walls and doors; or even a whole dimension could exist right in the same space as another, just waiting to be joined into one.

As followers of Jesus this is extremely hopeful. The creator of the cosmos is pulling all of creation forward and it is becoming more complex. In Paul’s letter to the church in Colossae we read:

The Son is the image of the invisible God, the firstborn over all creation. For in him all things were created: things in heaven and on earth, visible and invisible, whether thrones or powers or rulers or authorities; all things have been created through him and for him. He is before all things, and in him all things hold together. And he is the head of the body, the church; he is the beginning and the firstborn from among the dead, so that in everything he might have the supremacy. For God was pleased to have all his fullness dwell in him, and through him to reconcile to himself all things, whether things on earth or things in heaven, by making peace through his blood, shed on the cross. vv. 15-20 NIV

Maybe the next level is the reconciliation of all things. Possibly, the Church is Christ’s means of doing this. We are more connected than we know. Maybe the connectedness of creation, the new creation is what is evolving now. We can participate in God’s creation by imitating God revealed in Jesus. We can love our neighbor as ourselves, which means all of humanity including our enemy. And, we can care for God’s earth in anticipation of the renewal of all things.

For the creation waits in eager expectation for the children of God to be revealed. For the creation was subjected to frustration, not by its own choice, but by the will of the one who subjected it, in hope that the creation itself will be liberated from its bondage to decay and brought into the freedom and glory of the children of God. We know that the whole creation has been groaning as in the pains of childbirth right up to the present time. Not only so, but we ourselves, who have the firstfruits of the Spirit, groan inwardly as we wait eagerly for our adoption [as children], the redemption of our bodies. Romans 19-22 NIV

† The photo above was taken by the Hubble telescope. Each light speck is a galaxy – some of these are as old as 13.2 billion years – the universe is estimated to contain 200 billion galaxies.

“Are virtual particles really constantly popping in and out of existence? Or are they merely a mathematical bookkeeping device for quantum mechanics?.” Scientific American. 09 Oct. 2006. http://www.scientificamerican.com/article/are-virtual-particles-rea/